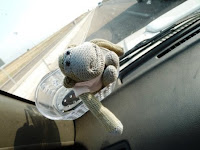 A super long driving day (over 15 hours) passing through Ankara, Turkey’s capital city, all the way down to the South Coast and the resort of Marmaris. 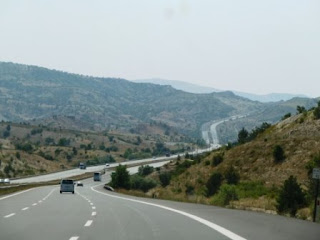 A Suzuki Jeep had crashed and rolled just off the main highway as we whizzed by. A quick glance and it looked like there was still a person inside the vehicle. A hasty U-turn and we found the driver sat alone in driver’s seat. “Are you OK?” we asked very concerned. The driver popped out and explained in quite good English that the crash had occurred over an hour ago and he was now awaiting the arrival of the Tow Truck.

After ensuring that he was fine, and had plenty of supplies, we headed on our way. This was actually the second crash that we had seen this day, Turkish drivers are generally very “confident”. Considering the state of his car, and the large skid marks on the road, he was one very lucky guy.

Barnaby also had a quite a few overheating issues today. The days are so hot, and Mountains are so high that it causes the Gearbox Oil to overheat. This results in losing Overdrive, roughly the equivalent of 4th & 5th gears, and nice red lights let you know this. 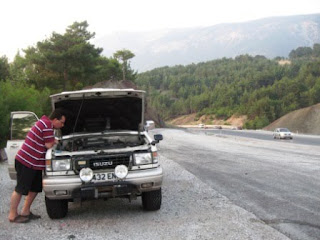 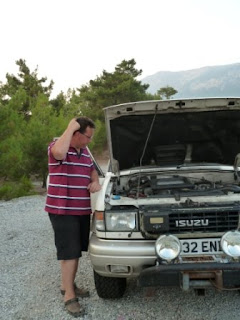 Houston we have a problem 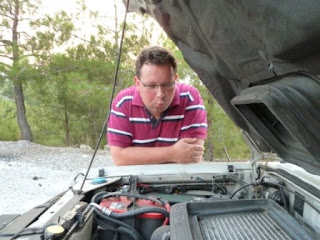 FAIL - blowing the engine cool
Unfortunately with only 3rd gear available, the engine revs much higher at speed, giving little chance for the engine and gearbox to cool down.

Frequent stopping along the way is the favoured option to help alleviate the problem, when this is not possible; slowing down to keep the revs under 2000rpm is the only other viable alternative. 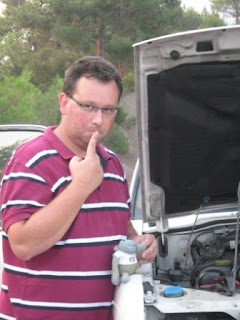 I’ve posted the issue online at the Troopers owners club, it looks like it may be a temperature sensor issue, but it could just need an additional external oil cooler. It’s much harder to fix these issues when your friendly mechanic is so far away. 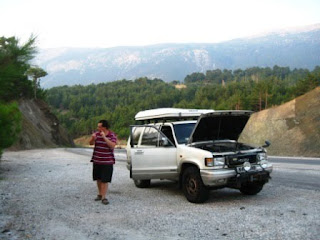 In the late hours we arrived in Marmaris which is a very touristy town, particularly at this time of year, and so it wasnt long before we headed to the smaller town of Icmeler in search of a campsite. Unable to find a suitable site after circling Icmeler for 3 hours, we finally settled on camping at the Terminus stop for the local Dolmus buses, the best option available on our budget as the 2 hotels we enquired out were out of our budget.

nice pics and cant't what to see you ric and zowi