Quite a long driving day ahead of us, we encounterd a few interesing sights along the way. Knowing very well just how bad council decorations can be, we intiially thought that these fell right into such a category. Upon closer inspection it was discovered to be the nesting place of choice for the local Herrons. 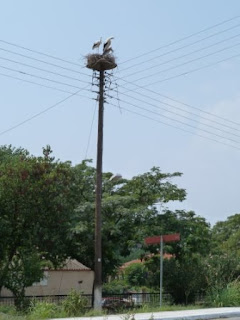 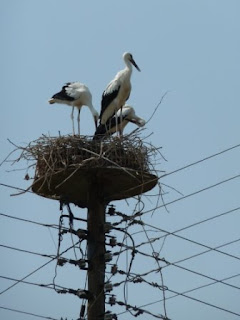 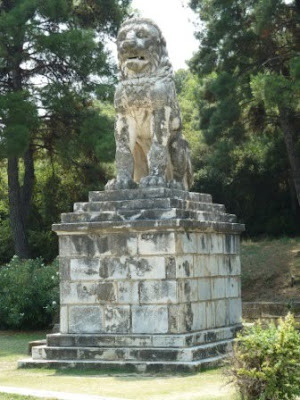 The famous Lion of Amphipolis is part of the late 4th Century BC funerary sculpture, a monument to martial virtue. It is believed that it was erected in honour of Laomedon from Lesbos, one of Alexander the Greats’ three greatest Admirals, known to have settled at Amphipolis.
It was restored and erected on a conventional base at the spot where it was discovered on the West bank of the River Strymon. Its discovery is connected with Macedonia’s contemporary war history. Greek soldiers digging during the Balkan War (1912-1913) found the first pieces of the monument. 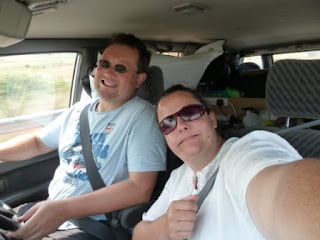 Previous Border Crossings were very straight-forward and it was sometimes a surprise to find that you have already crossed into another country. This disappointed Zowi on 2 accounts; the first that a photo opportunity for a Border sign was missed and also no additional stamp would be added to her Passport. 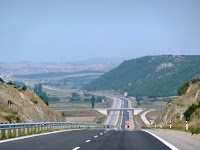 The Long and winding road... 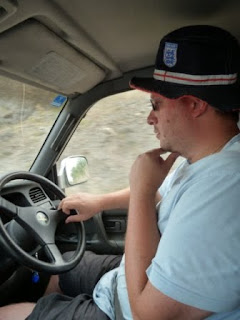 The Greece/Turkey Border was different. Border Guards were present, different booths were dotted along the way containing various people each performing different duties. The first booth people waved us on. Later there was some back-tracking as we needed to pay for our Visas, and also buy insurance for Barnaby. 4WDs are not as common in Turkey as the UK and we have found there can be some confusion as to whether Barnaby is processed as a Car or Campervan. The quickest solution we found is to take a digital photo of Barnaby and show this to the confused individual when needed! – Barnaby has been classed as a Car on most occasions, saving us a few pennies along the way.
Wassup Dude?  Just some very cool dude behind the wheel. Him and his homie get up just crusing through town   ------->>>>

Have you seen this man? Wanted for crimes againt fashion. Small and i mean very small reward offered.


The crossing into Turkey took about 1 hour, however the queues coming into Greece were horrendous. If you are unlucky enough to be going this way, pack lunch, board games, dinner, sleeping bags and pillows as you will have a long wait. A few Regulars were enjoying Picnic lunches as they queued on the Motorway!