Diniz is a beautiful, mountainous, skiing area some 120km outside Tehran. 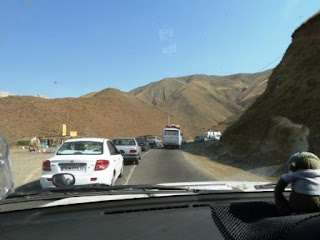 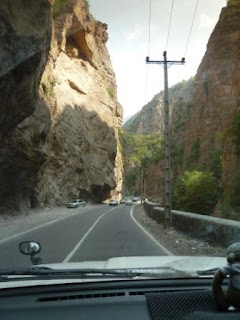 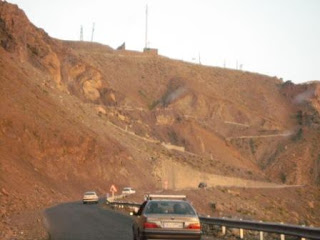 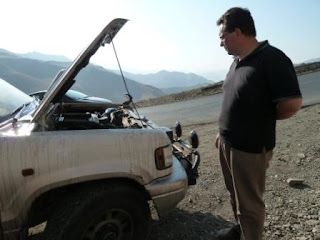 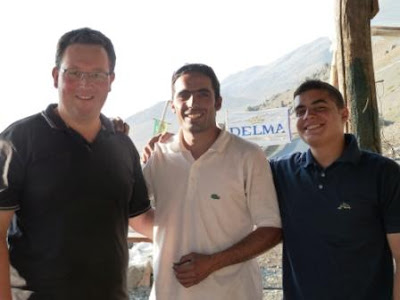 A guess its one way to meet Iranian Winter Olympic Skier, Hossien Kalhor!  Hossien kindly helped us to cool Barnaby down with a hose pipe, and then noticing that Barnaby had not been washed for a few weeks, set the hose pipe on him with Richard scrubbing Barnaby clean. He even made sure that not a spot was missed. He must have known that it would be a long time comming before the car would be this clean again.
Hossien works as a Ski Instructor in the Winter months, but in the Summer months he sells Tea and 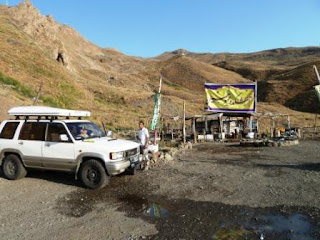 Soup by the roadside.  As we waited for Barnaby to cool down a little more, we offered tea, which we gladly accepted, then we were offered soup which tasted delicious. 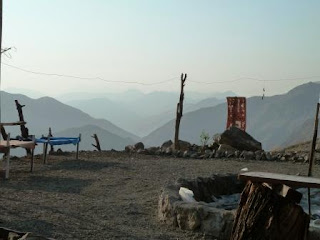 Hossien's tea shop. What a view.
Hossien would not accept any money, either for his assistance with Barnaby, or for the food and drinks that he plied us with.  Hossien told us that we were "his friends" and that you cannot accept money from friends.
We had read in a guide book that many Iranians subscribe to something called "Tarouf".  It is a situation whereby an Iranian will refuse payment for something, or maybe offer something such as a meal or a room for free, but he doesn't actually mean what he has just said! (sometimes he may not be able to financially fulfill this offer), you then have to work out if the offer is genuine or not, often by refusing their kindness several times.  If the offer is sincere, it can be accepted on the 3rd or 4th time of asking!

Hossiens offer of not taking any money from us was sincere! 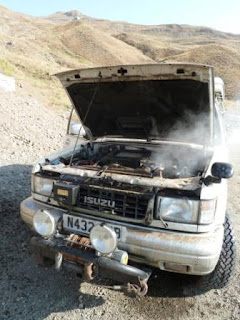 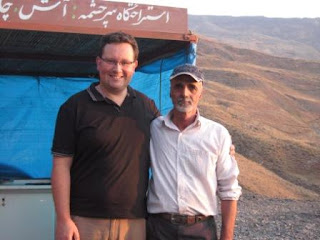 50m higher up the mountain and Barnaby panicked again.  A hose pipe had burst and it wasn't a pretty site.  Fortunately we had stopped at another Tea seller who spent nearly 2 hours helping us fix the burst hose, even stopping other motorists to ask for spare parts!
The DIY patch did its job, and we all made it without any problems into Tehran.
There are 20 million people living in Tehran and it feels as though 19.9 million of them are all driving with 100 metres of you!  Even though it was getting towards late evening there was so much traffic, and so much chaos.
We stopped and with the help of a local guy, we purchased a local payphone card and an international calling card.  The guy translated the Farsi phone card instructions, and we were soon speaking with Edward back in England for rough directions to his Niece, Lernik, in Tehran.
Stopping at a photograph shop for some directions, 2 coffees were handed to us whilst one of the guys drew us a basic map to get into the right suburb of Tehran.  It feels odd to be made this welcome in a foreign country, a little suspicious at first, but very appreciative of the kindness shown.
We stopped a further 3 times at shops and garages to ask for directions - everyone stopped what they were doing to offer assistance.  When we called Edwards niece, Lernik, and her husband, Armond, it turned out that we were only 5 minutes away! - Not too bad! 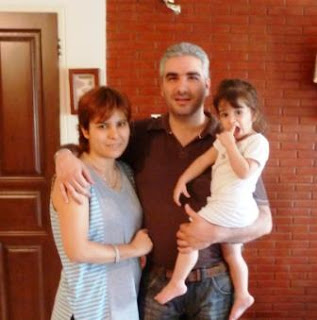 As we waited for Lernik and Armond on the street corner, I found myself smiling at every horn that beeped in case in was them.  In Tehran that means a lot of horns, and a lot of smiles.
Lernik and Armond are a married couple with a young daughter, Selia.  They have a wonderful home that we were made to feel very comfortable in.  Even though it was getting late, we enjoyed a fantastic meal before stealing Selia's room for a good nights sleep.  Thanks Selia!
Posted by Rich at 15:46