The early morning sun and roof tent combined forces to cook us slowly.  The camping ground was also a shortcut for early morning commuters, it was time to pack up and leave. 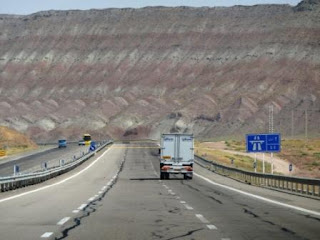 Taking to the road and heading off towards Ramsar we stopped for some Diesel.  In Iran, Diesel trucks often get their Diesel around the side, or the rear of the petrol station and this is where we headed.
A container was unloading Diesel and we would have to wait.  The driver of the container tried to guide me to the Petrol queue, but I kept saying "Gasoil" with an accent that any Welsh-Frenchman would have been proud of.  Realising that I was English, the driver took me (my woman waited in the car) upstairs to his home, and introduced me to his family whilst the petrol tanker continued to empty the Diesel into the pumps.
I was invited into their home whilst Zowi was left in the midday sun.  Even though we could not communicate verbally with each other, they treated me like a special guest.  A short while later, I made some excuses to leave, after all, I had a woman in the car that needed looking after.
They could not let me leave empty handed, and frantically searched for something to give me! - After a search of the fridge I was given 2 kilos of grapes and later, an ice-cold bottle of water! 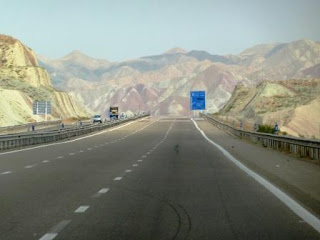 Imagine going to your local BP station in the UK and being treated this well!

Travelling on we entered Rasht around 8pm, tired and hungry.  The Lonely Planet helped us find hotels quickly enough, but they were all located on a busy street, with no parking.  2 hours were spent trying to find somewhere safe and secure to park, but nowhere was to be found.

Time to eat, there was a wonderful barbecue smell coming from many street vendors selling various types of meat on skewers.  I found the busiest one, and hand picked 6 skewers, not knowing what I had selected, but thats part of the adventure!  Most tasted fine except the last one, and we later found out that it was Lamb, Chicken and Sturgeon (which is popular in this area due to its proximity to the Caspian Sea).

Fed, but fed up, we left Rasht frustrated at the lack of parking.  Our resting place was to be a road side truck stop just outside of town, where we parked in the midst of other trucks. 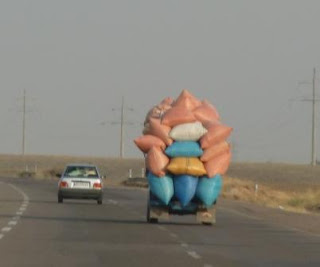 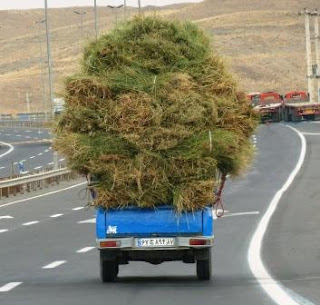 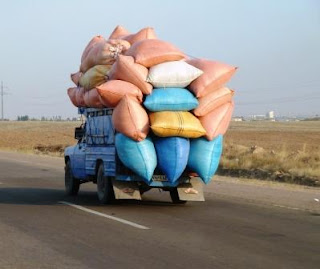 These didn't fail to make us laugh everytime.

If only they spent a few minutes planning, they could have fitted at least another 20 sacks on the back.
Posted by Rich at 09:59