People were cheering as some cyclists left Murat Camping in the early hours.  It sounded as though the cyclists were underneath the roof tent judging by the loudness of their voices.  They soon left and we were left alone, its probably time to get up.

The toilets and showers at Murat Camping were truly awful.  Shit springs to mind - at least the flies were happy.  No hot water, no taps that would turn.  Just muck and dirt of the dirtiest kind.  Not a place we would recommend  in a hurry.


Mount Arrat is located opposite Murat Camping.  Mount Arrat had snow on the peak much to our surprise, as at our level we had another day of mid-thirties heat.  Heading off to the border we stopped for supplies - mainly drinks, but a few snacks to sustain us on our journey.  3 young boys approached the car as we parked outside the shop, "Money!' they shouted as they held their hands out, "Money".  I held my hand out to them and their eyes lit up, "Money" I asked, turning the tables, "I want some of your money!" - They laughed, but didn't give up trying to get some money from us. This banter went back and forth for a while and eventually the boys seemed happy enough if we would just take their photo. Rich did however surprise them each with a bag of lollies. 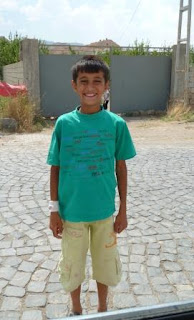 Back on the road and a huge row of parked trucks suddenly appeared before us.  I had read on another blog to expect this at the Iranian border approach, so we drove along side all the Trucks to the front.  Trucks then continue left, and we moved to the right to enter the border through a separate channel. 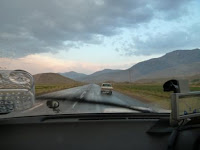 Iran here we come...yippeeee....
So we were a little excited as this we felt was to be our first border crossing into a country that we truly thought we would ever have the pleasure of visiting.
Much to our surprise, not all border staff wear a uniform or identity badge. Upon entering the border control we met various staff and others seemingly working for the border agencies.
The first helper of the day (Tourist Helper #1 or TH1) jumped on the bonnet, not asking if we wanted his services. We naively presumed that he was official staff.   As we did not know what to expect, we accepted his assistance.  It turned out that all he did was hand our passports into a booth and have our passports stamped! - 10 Euros for this!
Tourist Helper #2 attached himself to us as soon as we had passed through immigration, at least he was more helpful.  He assisted with the completion of the Carnet, obtained photocopies, ensured that the alcohol wasn't found in the car that we had forgotten to drink before the border.  He wanted 20 Euros for his services, but finally accepted 10 Euros when we explained to him several times how poor we had become!
Tourist Helper #2 passed us onto his colleague, TH3, who we later called "Stripey" because of his Stripey Jumper - the heat really doesn't fire our creative side does it? - TH2 also gave Stripey a piece of white paper, we were not sure what this paper was, but it turned out we should have paid much more attention....
Car insurance is purchased just before the main exit gate in a building marked "Insurance".  Lonely Planet advised to pay up to $45 USD in 2004.  Striped wanted $70, but ultimately accepted $40 after a lot of negotiation.
I had read in other Blogs that obtaining a Diesel Card at the border will help facilitate the purchase of Diesel  throughout Iran.  The 2004 Lonely Planet does not mention Diesel Cards, and my research prior to the trip did not include how much they would cost, or how to use them.

Stripey etched USD $50 onto the window for Diesel and we agreed.  Striped beamed from ear-to-ear.  How much Diesel would a $50 card buy, we didn't know, but it had to be cheaper than the $2 a litre we had paid in Turkey!

Now here is where the the problems began.  Stripey was actually withholding a stamped white piece of paper that would let us through the border gates.  Stripey did not want $50, he wanted $500 or we would not be leaving the border! 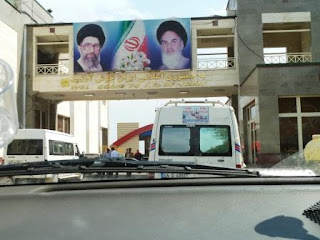 It turns out that all the Diesel trucks have to pay a fee depending on how far they want to travel in Iran.  If the Diesel truck wants to go to Tabriz (nearest city) he pays approx 75 Euros.  If he wants to go to Zahedan, near the Pakistan border, he pays nearly 1,000 Euros.  I'm still not sure if this money is a Tax, or for Diesel, or something else.

Stripey was arguing that we would have to pay $500 as we are a Diesel vehicle travelling to Pakistan and that we should pay this amount.

Holding the white piece of paper hostage, the situation developed into a stalemate situation.  There was no way that we would be paying $500 just to leave, we also didn't have $500 to give!

We went to the Border Gate Guard and tried to explain our situation but he did not want to help us.  Tourist Helper #4 later told us that Stripey is actually a very powerful man in this area, and that no one in the border would defy him to help us.  Stalemate.

Trying frantically to escape, we headed to another building to try and buy another white piece of paper.  Too late, Stripey had already phoned ahead and the Border Officer would not help us.  Everywhere we went Stripey would let himself in behind the counter and stop us.  There was no way out.  It was 36C in the middle of the day, with no shade and as it was Ramadan, there was no water to drink.

Away from Stripey, Tourist Helper #4 told us that if Stripey had wanted to help us, he could have told the Border Authorities that we were only going to Tabriz and that we only had $40 on us.  TH4 thought it was ridiculous to pay $500, but would not say this anywhere in the vicinity of Stripey.

TH4 took pity on us, and if it wasn't for him we could have been there for days.  He told us to park up and told us to refuse to move.  He told us that we should wait for 1 hour, maybe 2 hours, 3 hours, 6 hours.  Wait for what? - he didn't say! At one point I think 1am was mentioned but we hoped this time span was just a lost in translation time. We had no idea what we would do until one in the morning. However we set ourselves into a park space and stalemate continued.

2 hours later and a smartly dressed man wearing all black entered the border.  He had a presence about him that all the guards and Tourist Helpers acknowledged and respected.  Shaking hands firmly with Stripey he talked with him for about 30 minutes. All this time we sat, watched and speculated as to what was being discussed. It was clear the conversation involved the foreigners in the white 4WD, us.

Stripey came back to our car and was now prepared to accept $300 in return for the white paper!  It was a step in the right direction, but we were still not going to pay this.

"Everything that we have read about Iranian people is that they are lovely, kind people.  You have made us feel unwelcome in Iran and should be ashamed that he has tried to cheat us.  How can we trust any Iranians now if everyone is like this? You should be ashamed that this is how you portray your people and country" Zowi cried through the window at Stripey.

Stripey's whole demeanour changed in an instant.  He seemed genuinely appalled by his own behaviour and asked Zowi not to be upset.  15 minutes later he accepted $40 in return for the white piece of paper and left to go to another building for a Diesel receipt.

TH4 came over when Stripey left and we purchased 5 Diesel Cards, each with 100 Litres on each at $10 each (USD).  Stripey came back just as we were about to hand over $50.  "Whats going on here?" he barked.  TH4 looked terrified.  "Just asking directions" Zowi replied, thinking quickly.

Just 10 minutes later and we were through the border.  Stripey himself moved the guard aside and opened the gate personally.

Parking up just down the road we managed to get the $50 to TH4, we're not sure if Stripey saw this happen, if he did, TH4 may not have any knee caps.

The first petrol station that we approached we filled up.   Fortunately the petrol attendant spoke good English and we were relieved that the Diesel Card did have 100 litres on it.  The Diesel pump price read 13,158 - but I couldn't see if this was Tomans or Rials.

It had been a long day and we searched for a hotel in Tabriz, but only found high-class hotels which wanted $150 or more. Too expensive for us, but as time escaped us it did get more tempting!

At 2:30am Zowi spotted tents in a field.  At last, somewhere to sleep.  There was a young guy at the Security Gate who spoke a little English.  "Can we sleep there?" we asked, pointing to the tents.  I'm still not sure why 2 hours later we were still standing at the Security gate talking to this young man.  It was quiet.  He wanted to practise his English.  He controlled the gate. He seemed to be enjoying conversation with Rich about all sorts, even handicrafts (Rich's favourite topic, of course) and therefore couldn't let us go off to bed.

Finally at 5am he showed us a map of Tabriz and marked it with monuments and other structures that we should visit tomorrow.  Then he handed us another 50 or so identical maps, and then...... he lifted the security gate! - we were through!  Parked, tent up, ladder up, Zowi & Richard asleep in record time.

The silly part is that I'm sure that those 50 maps are still stashed safely away in Barnaby....well you never know.
Posted by Rich at 20:12