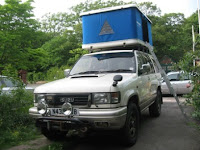 The 4WD would need to fulfil the following criteria...

1). Large enough to fend off some of the Worlds craziest drivers.

4). Reliable - neither Zowi or myself know any more than how to change the oil or a tyre.

5). To be located on a Used Car forecourt next to the pub, so that when I came out drunk on the Friday night and trip into it, I would know that it was a sign, and therefore buy it the next day.

There is a little debate as to whether Landrover or Landcruiser is the ideal vehicle for an Overland Expedition. I have read several blogs in which people mainly took Landrovers for their "Romantic Value" and the fact that they are "so British" - but they also seemed to take so many spare parts with them, and then some more parts just in case, and then the cautious / realistic would carry just a few more "essentials" just in case! - Worse still was that most of the spares were needed along the way.

A Nissan Patrol and a Shogun / Pajero also appeared as options, we looked at a couple of Shoguns, although they were well within budget, they seemed "tatty" to our untrained eyes. We almost bought a '94 Patrol, but we missed out by just a couple of hours. Shame really as this Patrol seemed to have been really well looked after.

We then got back on track and started hunting for an 80 Series Landcruiser, we were advised that we should be able to get a good 'un with around 100,000 miles on the clock on a 93/94 plate - but I swear that they went into hiding as soon as we started looking, and the 3 Landcruisers that we uncovered were very tired.

It wasn't looking promising until one night when I stumbled out of the "Thatch & Thistle" pub in Southport after quite a few beers. Across the road from the Thatch is Steve Newman Car Sales, and on his forecourt I spotted a large LWB 4wd. I wasn't able to tell the make of the 4wd due to the darkness and drunken stupor, so I went in for a closer look. It was love at first sight, especially when I saw a huge rusty winch on the front, I knew this vehicle was ready for some real action.


We went to look at the 4WD the next day when I was sober for a closer look and a test drive - we weren't let down. 40 minutes later the Isuzu Bighorn was ours for the princely sum of £1,900. He was immediately named Barnaby by Zowi, and quickly became the 3rd member of the team.

Barnaby is an imported 1995 Automatic LWB Isuzu Bighorn - similar to the Isuzu Trooper here in the UK, and similar to the Holden Jackaroo in Australia. Barnaby has a (virtually) indestructible 3.1TD engine with only has 71,000 miles on the clock, Lotus Handling and a 9000lb Winch to help get himself out of trouble when things get interesting. He also has Air Con for when it gets too warm, Heated Mirrors & Seats for when it gets chilly.

Barnaby has his own email address - Barnaby@zo2oz.com and usually responds to emails quickly. Clever little things these Japanese cars aren't they?

Hello Richard and Zowi,
I have just discovered your web site / blog spot. What a great adventure, I hope you have a safe and great trip. I'm looking forward to your regular posts of your fantastic trip,this will beat the heck out of coming to oz in plane.
Best wishes,
Pete (Zowi's uncle).