Late last night, whilst retrieving a few items from Barnaby in the Hotel Car park, Zowi spotted a car that is somewhat unusual to Iran – a Fiat Cinquecento!

The Fiat appeared to have been prepared as an Overland vehicle and was decorated with a list of all the countries already visited, starting with flags from Italy through to their destination, Australia. The Fiat also sported a picture of the drivers on the bonnet.

We left a note on their windscreen to say “Hello” and gave our room number in case they wanted to compare notes over a coffee or beer.

Returning to the hotel we tried to ask the Front Desk if there was a couple from Italy staying at the Hotel, but the guy didn’t know. He told us that the car park is shared with other hotels in the vicinity. It dawned on me that I hadn't put the Hotel Name on the note, just the room number. It was too late now to go and change the note. Perhaps we had the only Room 103 on the street

At breakfast in walked the pair of travellers with the Fiat, Simon & Chesa. We knew from the car that they were heading to Pakistan next, but they had news that the roads in Pakistan were impassable due to the recent floods that had ravaged the country.  Time to put Plan B into action.  Shit, we have no Plan B.  Plan A it is then.

Planning to see the more of Esfahan today and to leave for Shiraz later in the day we thought we could compare notes for an hour so.  Simon & Chesa were also heading to Shiraz, but had planned to leave in the next 10 minutes. There was just enough time to take their mobile number from them before saying “Ciao”.

We enjoyed a morning walk around the park near the hotel. Kids were playing football on the field, other men were playing Volleyball, just a typical day which could be anywhere in the world. Within the park is Hasht Behesht, a Palace built in the 17th Century and  was once the most luxurious decorated Palace in the city. 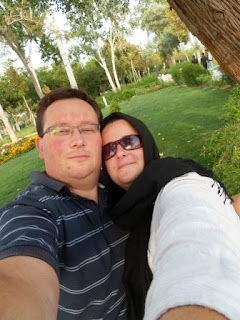 The drive to Shiraz was about 300 miles. Iran was the first country that we felt that Barnaby attracted a lot more attention on the roads which may be due to the foreign number plates. It is possible to obtain Iranian Number Plates, but they are not required for stays of less than 10 days and cannot be kept as souvenirs when leaving Iran, so we avoided the extra cost and paperwork and kept N432ENB.
Curiosity on the roads is normally a 7-step process...
﻿
﻿
﻿ ﻿﻿﻿﻿﻿﻿﻿﻿﻿﻿﻿﻿﻿﻿﻿﻿﻿﻿﻿﻿﻿﻿﻿﻿﻿﻿﻿﻿﻿﻿﻿﻿ 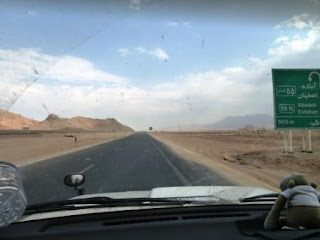 Arriving in Shiraz we set about looking for the Hotel Zand which is about the only hotel listed in the Lonely Planet with secure parking. According to the address and map, it is located just off the main road. We missed the turn off and headed for a U-turn which wasn’t to exist.  Suddenly a little Fiat Cinquecento pulled from a side street in front of us. Simon and Chesa were in Shiraz and having the same problem locating the hotel as we were. Pooling our skills, knowledge and resources together we drove around for another 20 minutes before Chesa found the Hotel after asking the locals for directions.
What a tight fit! The car park entrance to the Hotel Zand was fine for a little Fiat, but Barnaby (and Richard) both a little bigger, struggled to get in, eventually squeezing in after folding mirrors in with only millimetres to spare. Richard was not looking forward to getting out in the morning.
﻿
﻿After settling into our very basic rooms, we knocked on the door next room to see if Simon & Chesa wanted to find some food with us.  They were about to shower and advised that they would go later.  The streets of Shiraz had a different feel to the other cities in Iran.  Zowi was attracting a little bit more attention from the men standing outside their shops than we both felt comfortable with, possibly as she was only wearing a baggy long sleeve shirt instead of a manteau coat. This was the first time Zowi felt the attention was not welcome. The restaurant that we were looking for had also closed down.  Feeling tired and frustrated, we headed back to our room and heated some soup and noodles for dinner before heading to bed to sleep.

Cataract Drivers are so named due to very poor eyesight. Cataract drivers need to have their fog lights on and their full beam lights on throughout the night, blinding all drivers they pass.

Carrot Drivers are the complete opposite and can see in the dark very well. Carrot drivers don’t bother with any lights on at all. Kinder Carrot drivers replace the standard headlight bulbs with 1 blue “Christmas Tree Bulb”. “Surprise!” they shout in Iranian as they suddenly appear from nowhere. 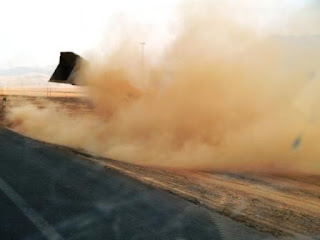 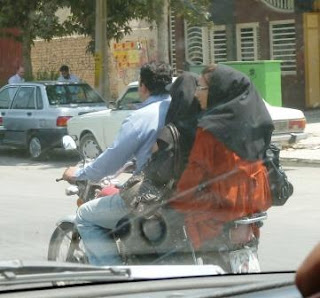 Sandstorm brewing on the side of the road.
﻿﻿
﻿Only three people this time. However not  uncommon to see a family of five out for an evening cruise.
Posted by Rich at 08:36

We have left Iran, but I'm not saying more... yet! - Watch this space this weekend for Blog updates.

I have a Trooper too (Monterey in Portugal), and love this epic trips...
Waiting for your updates...where are you?
Rgds
Nuno